Archive for the tag “hush”

Murder on the train 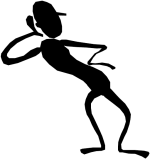 P had been ill at ease with the night travel by train in India, especially when he did not get tickets for the air-conditioned compartment and had to travel second class with the windows left open to counter the heat. It was not helpful that only the previous day, he had watched the film ‘Madras mail’, which was about a murder on a train. Tired, he had however nodded off and was woken as the train jerked to a stop at a station.  As he lay there with his eyes still shut, slowly drifting off to sleep, he was jolted by the sound of a slap. He kept his eyes closed and listened…

Woman’s whisper: “Hush! I don’t want you to wake up everybody on the train!”

Through half-opened eyes, P slowly peeped at the family of three on the opposite berth, travelling in the same cubicle. The dim light was still turned on and he could discern the figure of the man slouching by the window, probably fast asleep.

The woman was now looming over the husband with her hand slightly raised as the tot stood by her side, anxiously whispering “Get him mummy, get him!”…

P was shocked to hear the child say those words… He couldn’t believe a child could be so evil!… But then he remembered the famous film, “Omen” and he shuddered.

The woman was now leaning towards her husband and as her raised hand came down in a slap, P cringed and shut his eyes…

Child’s voice: “Did you kill him?”

Child’s voice: “Did he escape again?”

P breathed a sigh of relief…

The woman was trying to kill a mosquito… and not her husband!

Unless of course, by the term “mosquito”, she was alluding to her husband…